Link to this page

John William Godward was born in 1861 and lived in Wilton Grove, Wimbledon.

He exhibited at the Royal Academy from 1887. When he moved to Italy with one of his models in 1912, his family broke off all contact with him and even cut his image from family pictures. Godward returned to England in 1919, died in 1922 and is buried in Brompton Cemetery, west London.

One of his best known paintings is Dolce far Niente (1904), which currently resides in the collection of Andrew Lloyd Webber. As in the case of several other paintings, Godward painted more than one version, in this case an earlier (and less well known) 1897 version. 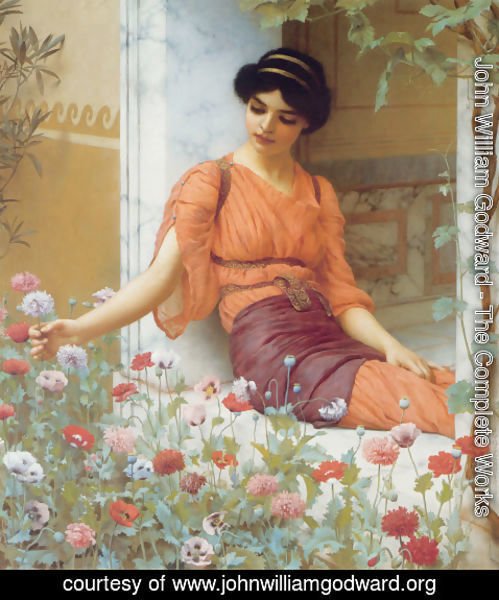 Godward was a Victorian Neo-classicist, and therefore a follower in theory of Frederic Leighton. However, he is more closely allied stylistically to Sir Lawrence Alma-Tadema, with whom he shared a penchant for the rendering of Classical architecture, in particular, static landscape features constructed from marble.

The vast majority of Godward's extant images feature women in Classical dress, posed against these landscape features, though there are some semi-nude and fully nude figures included in his oeuvre (a notable example being In The Tepidarium (1913), a title shared with a controversial Alma-Tadema painting of the same subject that resides in the Lady Lever Art Gallery). The titles reflect Godward's source of inspiration: Classical civilisation, most notably that of Ancient Rome (again a subject binding Godward closely to Alma-Tadema artistically), though Ancient Greece sometimes features, thus providing artistic ties, albeit of a more limited extent, with Leighton.

Given that Classical scholarship was more widespread among the potential audience for his paintings during his lifetime than in the present day, meticulous research of detail was important in order to attain a standing as an artist in this genre. Alma-Tadema was, as well as a painter, an archaeologist who attended historical sites and collected artefacts that were later used in his paintings: Godward, too, studied such details as architecture and dress, in order to ensure that his works bore the stamp of authenticity. In addition, Godward painstakingly and meticulously rendered those other important features in his paintings, animal skins (the paintings Noon Day Rest (1910) and A Cool Retreat (1910) contain superb examples of such rendition) and wild flowers (Nerissa (1906), illustrated above, and Summer Flowers (1903) are again excellent examples of this).

The appearance of beautiful women in studied poses in so many of Godward's canvases causes many newcomers to his works to categorise him mistakenly as being Pre-Raphaelite, particularly as his palette is often a vibrantly colourful one. However, the choice of subject matter (ancient civilisation versus, for example, Arthurian legend) is more properly that of the Victorian Neoclassicist: however, it is appropriate to comment that in common with numerous painters contemporary with him, Godward was a 'High Victorian Dreamer', producing beautiful images of a world which, it must be said, was idealised and romanticised, and which in the case of both Godward and Alma-Tadema came to be criticised as a world-view of 'Victorians in togas'. (From wikipedia)

Report an error on this page